Export music out of BBM on iPhone to PC

*This method no longer works due to changes by Apple*

PLEASE COMPLETE THIS GUIDE
http://blog.codestrike.net/2014/05/access-music-bbm-iphone/
PRIOR TO FOLLOWING THIS EXPORT GUIDE.

Step 1)
Connect your iPhone to iTunes. Go into iTunes, Click your device and navigate to the “Apps” Menu and scroll down. 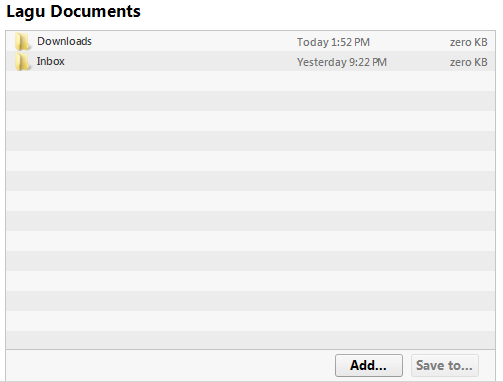 Step 3) Select the folder “Downloads” and click the Save to… Button. Choose a folder to save to (In my example I have created a new folder called “Saved Lagu Music” on the desktop.

You should have now successfully exported all music.

END_OF_DOCUMENT_TOKEN_TO_BE_REPLACED

*This method no longer works due to changes by Apple*

Since the release of BBM for other devices, Blackberry has been working hard on copying all features from the original BBM over to Android & iPhone devices. I have noticed while BBM lets you receive music it does not infact let you control what happens to it. But there is a workaround.

Requirements:
You will need the iOS App “Lagu” free from the AppStore (This is a 3rd party music app).
(https://itunes.apple.com/au/app/lagu-formerly-music+/id462782680?mt=8)

Step 1) Once you receive a song from someone on BBM (Making sure not to put your phone in standby whilst receiving it) click once on the song. Now click the button outlined by the red circle

Step 2) Once you have clicked the button you should be on a screen like this, You now want to click on “Open in Lagu” outlined by a red circle.

Step 4) Now you can access all music received from friends on BBM in a easy way on your iPhone.

[Want to export this music onto your PC? Click Here to view the exporting guide.]

Update #2: There is no present way to send music from an iOS device to a BBM contact.

Update #3: For a short period BBM allowed you to send music within the app as long as your music was located on your dropbox account. Unfortunately this only worked for a short time and as of 17/05/2014 it does not work anymore although the feature remains. I have also contacted BBM suggesting they implement the “Open In” API which will allow you to send music from other apps to your BBM contacts without being restricted to Dropbox. I have yet to hear a response.

Update #4: This method no longer works due to Lagu no longer being available on the appstore. 29/12/15